Is your liquid snow chains spray just only pine resin dissolved in alcohol or toluene, like some other products?

No. Pine resin is effective in some conditions (clear ice, black ice) but it must be specially prepared by removing fractions of bicyclic monoterpenes to increase hardness and making the thin film of resin fully insoluble and not softening in water. Such kind of colophony is a part of our product. There are disadvantages of using colophony: it can be easily removed mechanically (by spinning even in snow or on ice). Another  problem is that colophony is proven to be ineffective in melting snow, and shows only partial improvement in friction over raw tire in frozen dusty snow. 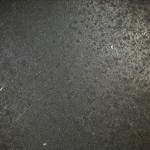 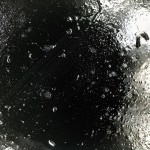 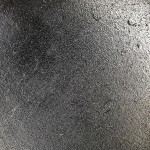 Thus, there is a need to use two more ingredients to adapt such mixture to work in snow in general and particularly in melting snow. These ingredients also ensure that simple wheel spin won’t remove liquid snow chain from tires. Our research has found that an adequate mixture of two types of self-polymerizing bisphenol-epichlorohydrin synthetic unhardened resins will solve problems listed above.

Instead of using toluene (toxic) or alcohols like IPA (they evaporate too slowly and cannot properly reduce the surface tension, when in contact with greasy surfaces or spots – see middle picture) we use β-ketopropane (after evaporation β-ketopropane is naturally degraded by UV light via photolysis) – your liquid snow chains spray covers the surface evenly with thin layer and is ready to save you from troubles in 3 minutes after spraying your tires.

Is that a kind of magic?

Why do you use atomizer instead of spray can?

We have tested spray cans as packaging for such „spray on tyre winter chains”, but they are ineffective.
First, a thin film of liquid snow chain works better when it is as thin as possible, while evenly covering the whole surface of tire tred rubber. Spray overdoses the mixture, especially while applied by the driver in stress or at dark.
Second, thick, overdosed solvent evaporates slower, especially in frost, and usually after advertised 2-3 minutes such liquid chain is not yet ready, as it is still wet. If the driver starts to drive, the chain will be removed from the tire in seconds.
Third, a small 50 ml atomizer is as economic and effective as 200-300 ml can. But you can take it with you into your bag to use with your shoes, hide in your pocket or easily store in the car.

IzzyGrip Liquid Snow Chains vs IzzyGrip Camper Traction Aid – are they the same?

No. To ensure proper traction on surfaces covered with thin layer of water, a hydrophobic nano-agent is added to Camper Traction Aid. With surface pressure over 0,5kg per square cm it removes water film from between tire and grass. This increases adhesion even when water or mud is between tire and ground.

Can I use IzzyGrip Camper Traction Aid as liquid snow chains?

Yes. There is one weakness caused by hydrophobic agent added to Camper Traction Aid – such liquid snow chain will evaporate slightly slower and traction improvement in wet snow will be increased not as efficiently as in the dedicated version of IzzyGrip. Gains at raw ice, black ice, powder snow and frozen snow will be same for both products.

Can I use IzzyGrip Liquid Snow Chains as a camper traction aid?

Yes. In the case of using it while surface is wet, it is highly advised to wait longer, up to 5 minutes before start driving. This may improve results at moist surfaces.

Does IzzyGrip abrade or wear out my tires?

No. Products that use solvents theoretically may affect rubber by softening its surface, and thus, promote abrasion, but this applies to permanent and long-term contact of solvent with rubber. Solvent used in IzzyGrip evaporates in seconds.

Is IzzyGrip harmful for my skin?

Prolonged contact with solvent may degrease the skin, and other components will make your skin sticky. Dry layer of IzzyGrip is water-resistant, and cannot be easily washed with water and soap. It can be washed with any alcohol or mechanically scrubbed.